Daughter of Fire: A Portrait of Iceland by Katharine Scherman #TraveltheWorldinBooks

Posted on September 6, 2014 by Lucy Pollard-Gott 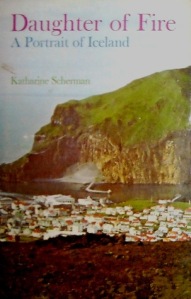 Daughter of Fire: A Portrait of Iceland by Katharine Scherman, Boston: Little, Brown and Company, 1976.

Whenever I hear just the word Iceland, I feel exhilaration. I picture broad flat terrain, nearly treeless, punctuated by some flat-topped volcanoes and bubbling hot springs. I picture yellow wildflowers as far as I can see and a view over a clear ocean bay. I picture glaciers and I imagine coldness. Not a painful feeling, though my mind knows that Iceland’s fierce winds and dropping temperatures in winter can be rough on a human, but in my mind, it’s a bracing coldness–the kind that makes you open your eyes wider and breathe more deeply to feel the bite of the air.

Katharine Scherman’s classic book on the geography and history of Iceland certainly fed my imagination. To my mental scene, I added wheeling eagles and gulls, fulmars (a sea bird), auks, puffins, and plovers. I could imagine the black or gray basaltic sand beaches , and I learned the word tephra, for all the ash, pumice, and explosive lava spray that vaporizes and settles back in layers on the earth, enough to bury a whole town. Heimaey is an island off the southwest coast of Iceland (but east of Reykjavik), and tephra buried its main town in January 1973 when the long-quiet Helgafell volcano erupted. When the eruption started, the few thousand inhabitants were moved by boat to the mainland; they were luckier than the people of ancient Pompeii. Amazingly, a year later, 900,000 tons of debris and ash had been removed from the town and most people had returned to the island. Where did they take all that ash? Scherman says it was used to lay the foundations of miles of new roads and also to extend the harbors.

Scherman and her husband traveled throughout the country, and her travelogue is full of careful observation of the land and the creatures inhabiting it. She divides the island into three portions, providing a nicely detailed map of each at the head of its section, then proceeds to teach the reader in beautiful lucid prose about the geology of the region, about its history and connections to Iceland’s sagas and other arts, and about the lives of some of its modern town and country dwellers. South Iceland (chaps. 1-6) has the volcanic islands Surtsey and Heimaey, and the modern capital Reykjavik. West Iceland and the Northwest Peninsula (chaps. 7-15) is the most varied region she explores. 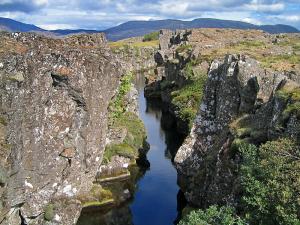 It has the Thingvellir plain where the Althing met; it was the proving ground for Iceland’s experiment in egalitarian, democratic rule beginning in the year 930, about 60 years after the first Norse settler, Ingolf Arnarson, had arrived. To address the chief men and their families assembled on the broad plain, the Lawspeaker would stand on the ridge created by the splitting open of the earth, along the North Atlantic Ridge–the same north-south ridge that runs under the ocean popping up at only a few islands, the Azores, Ascencíon, and Tristan de Cunha. The spreading of this ridge is the source of the restlessness that produced the nearby volcano, Hekla. The plains and rivers of this area make up Njal’s country, as Scherman calls it–Njal is the wise, but unfortunate protagonist of the most important of the 13th-century family sagas. His efforts at peacemaking in the endless cycle of revenge killings just make him a target as well. This big region also includes the Northwest Peninsula with its fishing industry, threatened by overfishing:

Though the town of Isafjord seems on the surface still to prosper, the smaller villages of the Northwest Peninsula starkly reflect the decline of fishing. The great fjords, with their many tributary inlets, were as inviting country for small-boat fishing as they were for earlier sailors with wanderlust, and they are dotted with clusters of houses and docks. The fishermen found plenty of fish in the calm, nearly landlocked waters, without having to chance the rough ocean. With the coming of the gigantically efficient deep-sea trawlers that fish out everything from the smallest cod to the eighty-year-old lobsters there was not enough left in the fjords to give the small fishermen a living. …This water-oriented country that nourished the sea dreams of men like Erik and Thorfinn Karlsefni is today a place of deserted houses and rotting docks. It is beautiful in its loneliness, but it is very sad. (Scherman, p. 236)

Since the time of Scherman’s book some efforts have been made to have ecologically sustainable fishing in the areas off the Northwest Peninsula, and the decline in yields has been slowed or halted. But I suspect that the competition is still too fierce for small fishermen. Still, I was grateful to read Scherman’s accounts of meeting Peter Petursson, an older fisherman who kept a family home at Hesteyrarfjord (Horse fjord), and Gudmundur Sveinsson, who owned a fishing-net factory in Isafjord.

The third region, Northeast Iceland (chaps. 16-17), contains some important rivers and glaciers as well as the interior desert plateau that only adventurers crossed. Part of that wilderness, called Odadahraun, was associated with the saga of the outlaw Grettir the Strong, who had battled trolls and ghosts but ran afoul of ordinary men.

Two things I especially enjoyed in this book:

I realize that the book is nearly four decades old; the chapter on Iceland’s Cold War politics was particularly dated, if nevertheless interesting as a time capsule. But most of it reads as very contemporary indeed, given the 2010 eruptions of the tongue-twisting Eyjafjallajökull, the glacier that covered a volcano, and the ominous fissure eruptions of Holuhraun this month!

I am happy to have this book be my first review as a participant in the Travel Around the World Challenge and this month’s Readathon.

Daughter of Fire is available, both new and used, at online booksellers; I got my copy at my local public library. I wanted to add a link here to A Reader’s Respite who has a guest post at Mom’s Small Victories. She describes so well, from her own experience, how traveling the world in books begins with that first library book, and it never has to stop!

Thanks to the Challenge and Readathon hosts, Mom’s Small Victories, I’m Lost in Books, and Savvy Working Gal.

Author of The Fictional 100. http://fictional100.com http://fictional100.wordpress.com http://northernlightsreading.com
View all posts by Lucy Pollard-Gott →
This entry was posted in Travel and tagged Book Reviews, Grettir the Strong, Iceland, Icelandic, Njal's Saga, Readathons, Sagas, Travel the World in Books. Bookmark the permalink.

6 Responses to Daughter of Fire: A Portrait of Iceland by Katharine Scherman #TraveltheWorldinBooks