I have really enjoyed this month’s Travel the World in Books (#TTWIB) challenge, organized by Aloi of Guiltless Reading, who invited us to read one book by a Nobel prize-winning author. Her announcement post for April’s combined challenge has the linkups of those who participated, along with numerous helpful links for learning more about the Nobel Prize in Literature and the diverse array of authors it has recognized.  Becoming better acquainted with these authors–both those we have read already and those still awaiting our exploration–was the best part of the challenge for me, since I now have a better conception of how the prize has grown and changed over time, especially in its expansion beyond Europe to Asia, Africa, Latin America, and Australia. 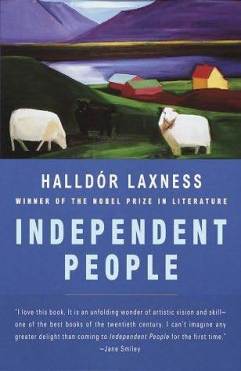 I have been reading Independent People, the most important book by Iceland’s 1955 Nobelist, Halldór Laxness. It was published (as Sjálfstætt fólk) in 1934/35. James Anderson Thompson is the translator of this beautiful paperback in English, which also includes an Introduction by Brad Leithauser. I recall reading Leithauser’s ecstatic praise of this novel in The New York Review of Books in 1995, and the Introduction reprints his article. It was titled “A Small Country’s Great Book” and began with the memorable sentence:

For Leithauser this was it, and he goes on to explain why this book about a struggling Icelandic sheep farmer was so fascinating and touched him so profoundly.

Bjartur of Summerhouses is a man who could probably have held his own with the protagonists of the legendary Icelandic sagas.  He appears to be as mean and stubborn as Egill Skallagrímsson, the 10th-century poet and anti-hero of Egil’s Saga. Bjartur himself composes rhymes and fancies himself a bit of a latter-day bard. Above all, he is defiant. He verbally mocks and ignores the ancient custom of placing a stone on the hill known as Gunnucairn, or Gunnvor’s cairn, the burial mound of a murderous old woman who was executed long ago in the area. Feared down the centuries, Gunnvor’s curses have seemed to haunt one sheep holding in particular, familiarly called Winterhouses. But Bjartur will have none of it, and hurls insults at Gunnvor’s memory, as he passes the cairn. After 18 years of working under the region’s Bailiff, farming for hire, he has saved enough money to buy the land called Winterhouses, and, dismissing the past, he decides to call it Summerhouses–as if merely renaming the place will turn around its long history of ill luck.

He and his friends talk and think of nothing but sheep and how to keep their flocks healthy, because year in, year out, the health and well-being of their sheep mean the difference between economic independence and falling back into near-slavery or starvation. As Bjartur surveys his new holding with its small croft-house, he voices his thoughts to his only companion, his rather forlorn dog, Titla:

“Size isn’t everything by any means,” he said aloud to the dog, as if suspecting her of entertaining high ideas. “Take my word for it, freedom is of more account than the height of a roof beam. I ought to know; mine cost me eighteen years’ slavery. The man who lives on his own land is an independent man. He is his own master. If I can keep my sheep alive through the winter and can pay what has been stipulated from year to year–then I pay what has been stipulated; and I have kept my sheep alive. No, it is freedom that we are all after, Titla. He who pays his way is a king. He who keeps his sheep alive through the winter lives in a palace.” (p. 13)

By and by, this independent man decides he needs a wife and chooses Rosa, the youngest daughter of a neighboring farmer. She had been working for the Bailiff of Myri and his wife, who was a poet and graduate of an agricultural college.  At Bjartur and Rosa’s wedding, the Bailiff’s wife romanticizes the simple joys of the peasants’ life “close to the land” in a long-winded speech, presumably in their honor. Laxness’ satire here is biting, because it is already apparent to the reader that life on these farms is often brutal and perilous, and not a country idyll.

Rosa has been living with the well-to-do Bailiff’s family for a while, albeit as their servant, and so the change to Bjartur’s rustic croft-house depresses her. It is low and dark, with a mud floor and only a small window in one of its turf walls. On their way to see it, Bjartur flatly refused her tearful entreaties to let her stop and leave a stone on Gunnvor’s cairn to ward off evil luck; this rueful beginning to their married life leaves Rosa both angry and miserable. Homesickness, poor food (mostly dried catfish), and Bjartur’s dismissal of her wishes at every turn, begin to weaken her in body and spirit.  When she complains and begs for a cow to provide some milk and cheese, he says no, but promises to make her a vegetable garden someday, but only after he has paid off some of his land’s debt. She wonders, what if she has a baby?–surely she can have meat and milk then? Nonsense, he says.  “She stared at him with anguish-stricken eyes and everything personal seemed suddenly to have been wiped out of her face.” (p. 40) It’s certainly painful to read about her suffering, and ironic that he thinks obsessively about securing his independence while he makes his wife a slave.

There’s a lot more to Bjartur’s story. His daughter, Ásta Sóllilja, will challenge Bjartur with her own implacable will.  This will be the pivotal relationship in his life, and I will write more about them when I get to the end! Thanks again to Guiltless Reading for a great #ReadNobels challenge!