#ReadNobels for Travel the World in Books in April @ Guiltless Reading 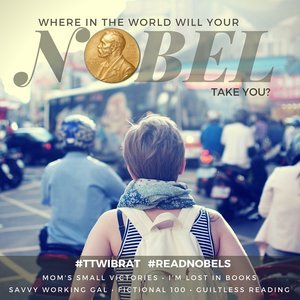 My esteemed co-host, Aloi of Guiltless Reading, is hosting our Travel the World in Books (#TTWIB) event for April, combining this ongoing challenge–to read our way around the world with diverse books–with her own fabulous challenge to read books by Nobel prize-winning authors. Her announcement post for April’s combined challenge has all the details, including numerous helpful links to reviews and resources for finding books to choose from. The main thing is to pick ONE BOOK for April, something by an author who garnered the Nobel Prize in Literature.

I will be reading Independent People, the most important book by Iceland’s 1955 Nobelist, Halldór Laxness. James Anderson Thompson is the translator of this beautiful paperback in English. That’s the lovely thing about the Nobel prize–it tends to motivate skilled translators to take up that author’s works and make them available to more readers worldwide. As another example, Emma of Words and Peace, herself a translator, reviewed 2014 Nobelist Patrick Modiano’s So You Don’t Get Lost in the Neighborhood (in English translation) last year for our October #TTWIB Readathon.  As you might guess from the cover, Independent People takes place on a sheep farm in Iceland. It was published (as Sjálfstætt fólk) in 1934/35 and Halldór Laxness remains the most important writer of modern Iceland. This book, the story of Bjartur of Summerhouse’s struggle to keep his sheep farm solvent and retain his independence, is perhaps closest in spirit to the legendary Icelandic sagas that are the jewel of Iceland’s literature. Laxness echoes this literary heritage brilliantly, yet he crafts an astute 20th-century novel around this stubborn, no-nonsense character and his daughter, Ásta Sóllilja.

I’m looking forward to answering the rest of Guiltless Reader’s fun and stimulating questions slated to chart each week’s progress and cheer on our exploration of Nobel writers. I’m also thrilled to be reading one of the hallmark writers of the Northern Lights countries, and one of the key books that motivated my starting this reading project in the first place.