Arctic Mysteries Run Deep: “Under the Snow” by Kerstin Ekman 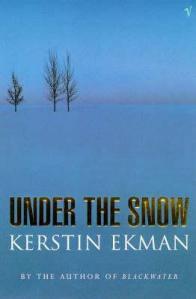 Kerstin Ekman’s Under the Snow stretches the police procedural  genre–or rather, freezes it–to fit its setting: a tiny Sami village on the Arctic circle in Norbotten County, the northernmost county of Sweden. Constable Bengt Torsson is called to investigate the death of art teacher Matti Olsson, at the small Rakisjokk Nomad School, situated at the far west end of a long, narrow lake. The school exists only for the Sami children, and the few Swedish people in the village are those doing weather measurements, teaching at the school, or managing the occasional tourist trade. This setting couldn’t be more different from that in another Swedish detective novel, The Laughing Policeman by Sjöwall and Wahlöö, which took place in the crowded urban setting of Stockholm.  The crimes in that novel took place on a double decker bus, whereas the only ready transportation to reach the Rakisjokk school is a set of skis! Torsson must ski across the frozen lake in March, with his guide Henrik Vuori, to begin his investigation. Ekman’s descriptions are as stark as the setting and she has a talent for making striking observations.

The glow from the ceiling light in its upper hall was the first gleam of life Constable Torsson saw as he and Vuori approached the village in the dead, dark gray dawn over the lake. (p. 8)

The shed [where the victim had been laid] seemed mostly filled with the kind of things that couldn’t be seen. The shifting patches of light were insufficient. The wind was nosing through the cracks and whistling greedily. (p. 10)

He [Matti] didn’t look as if he’d received a blow. What had he died of?  Torsson wondered. There were no rules here. He could have died of anything. Of the darkness. (p. 11)

Ekman describes every sound, the crunching of snow underfoot, lungs puffing in the cold–even the sound as one man rubbed the stubble on his face with a calloused hand. It was that quiet in the schoolroom where the teachers and villagers assembled to tell him their version of what had happened. There was Sjögren, the climatologist, who fought with Matti after a birthday party given for him; too much alcohol was involved. There was Anna Ryd, a beautiful auburn-haired Swedish woman who had been Matti’s girlfriend.  In her grief, she maintained a “paralyzing silence” while the story was told.  There were Pers-Anders Jerf and his sister Kristina Maria–Sami people whose taciturn father Edvin lived in a tent by himself away from the village.  There were Vuori and his wife Marta, an imposing, unreadable woman. Torsson listened to them all, but somehow could not take them in; he felt numbed and strange, as if they were waiting, expressionless, and watching him:

As they stood there beneath the naked bulb, in woolen shawls and caps with earflaps, they seemed to him nothing but eyes. He couldn’t keep them apart, almost confusing the dark, chubby Kristina Maria Jerf, Per-Anders’s sister, with the tall Marta Vuori.  They took their time scanning his face. (p. 14)

According to them, an intoxicated Matti had simply wandered out into the snow and died before they discovered him the next morning.  Torsson stayed on several days and found some evidence that didn’t seem to fit this simple picture–a mah jongg tile stained with blood, for example–and he painstakingly interviewed all those connected with Matti, but in the end, he couldn’t bring it into clear focus and went away unsatisfied.

A few months later, in July, one of Matti’s friends, David Malm, decided to visit his friend unexpectedly. On his way to Rakisjokk he encountered Anna Ryd who seemed to be in a hurry to leave–all she had in her car was a bark knapsack. Her car had hit a reindeer, and he tried to help her.  She flatly told him Matti was dead, with a warning to turn around and forget about inquiring any further: “He wasn’t what you thought he was” was her only explanation.

David sought out Torsson  and persuaded him to return to Rakisjokk to confront the evidence that didn’t add up and discover the truth.  David is an eccentric character himself–like Hamlet, he feigns a bit of madness to shake people up and shake out their secrets.  The pace of this already taut story really picks up from here on.  It may seem as if I’ve told a lot of spoilers, but what I’ve described so far is all over in the first third of the book–much more will happen and be revealed.

Despite this book’s title and my expectations, the descriptions of extreme cold were not its most prominent feature for me. Rather, the wound-up emotional tension and fear of discovery were even more palpable.  Imagine an English country house murder being transported to a wilderness schoolroom with few comforts, except for ever-present hot coffee and layers of thick clothing, but the people inhabiting it were just as tight-lipped.  Torsson is not a Poirot laying out the single-handed solution with a dramatic flourish, but rather a persistent facilitator of the truth, which emerges when some of the participants become ready to face it.

Ekman has such a sure hand with her prose that one genre is not enough!  She has given a fascinating video interview where she describes her philosophy of writing and her experiments with several genres.  I look forward to exploring some of her other novels, which include fantasy (The Forest of Hours), historical fiction (God’s Mercy), and more mystery (Blackwater).

This book counts toward this year’s #FrightFall readathon at Seasons of Reading, hosted by Michelle of The True Book Addict, and toward the ongoing Travel the World in Books Challenge, hosted by Tanya at Mom’s Small Victories. 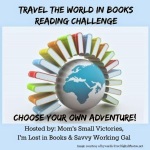 2 Responses to Arctic Mysteries Run Deep: “Under the Snow” by Kerstin Ekman